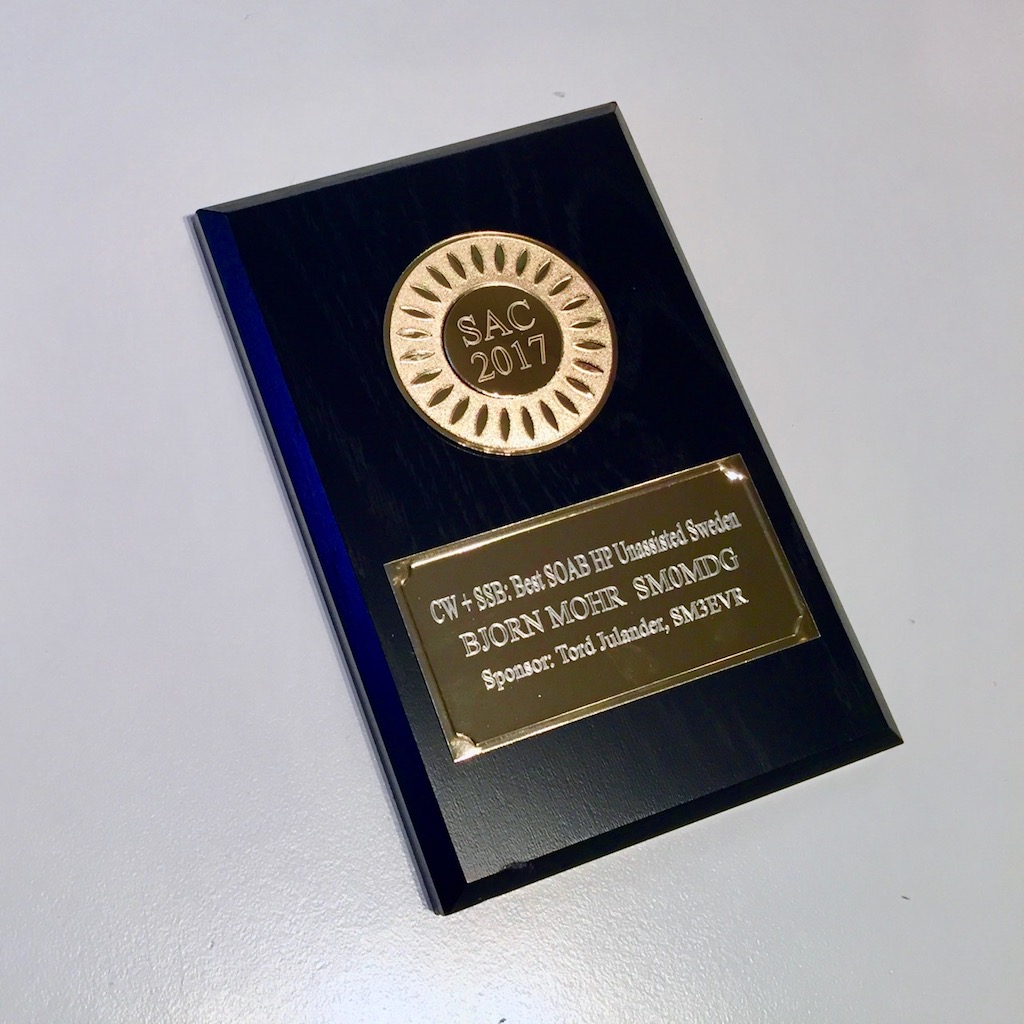 This morning a nice surprise appeared in the mail. It seems like I had the highest combined CW + SSB score in SOAB HP Unassisted in the Scandinavian Activity Contest (SAC). Not an official category, but very nice plack för the wall. Thanks to the sponsor SM3EVR Tord Julander! END_OF_DOCUMENT_TOKEN_TO_BE_REPLACED

CQ160 SSB is one of the most challenging phone contests. With thousands of operators sharing the narrow 160 meter band good filters and a lot of patience is crucial to survive this weekend while producing a respectable score. SM0MDG and SM0MLZ teamed up and logged on via remote to SE0X with the goal of breaking the Multi Operator SM record from 1995. How did it go? Read on to find out.  END_OF_DOCUMENT_TOKEN_TO_BE_REPLACED

The 2018 edition of the CQ160 CW provided lots of fun and SE0X broke the SM Record from 2004 in the Single Operator Low Power category. But right before the contest it looked like we had to cancel because of antenna problems. Full story follows, keep reading. END_OF_DOCUMENT_TOKEN_TO_BE_REPLACED 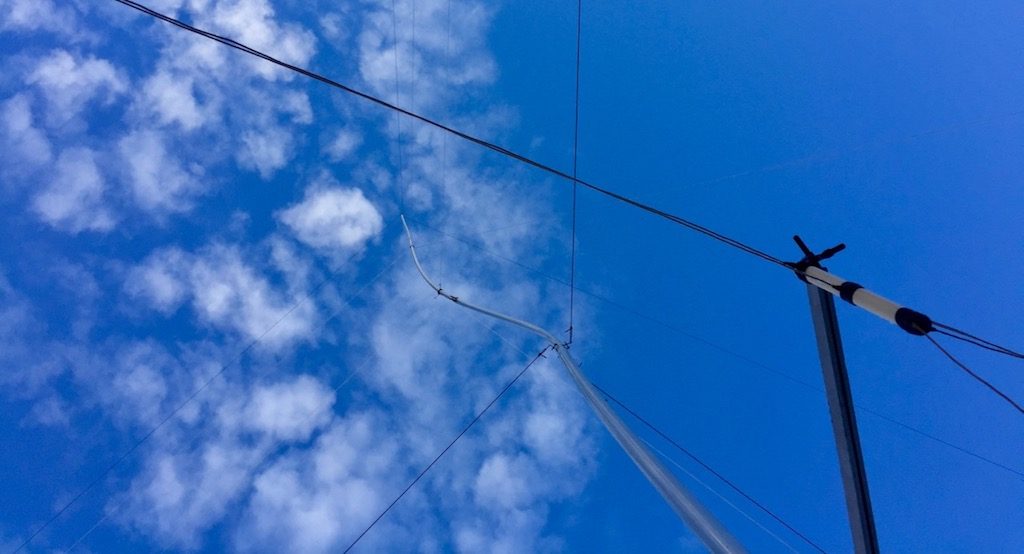 After years of successfully keeping my Topband vertical in service during winter storms in costal environment my streak of luck has finally come to an end. This season alone I had more problems with the Topband vertical than in the past 10 years. Heres a quick recap of the so far very eventful season at SE0X. END_OF_DOCUMENT_TOKEN_TO_BE_REPLACED 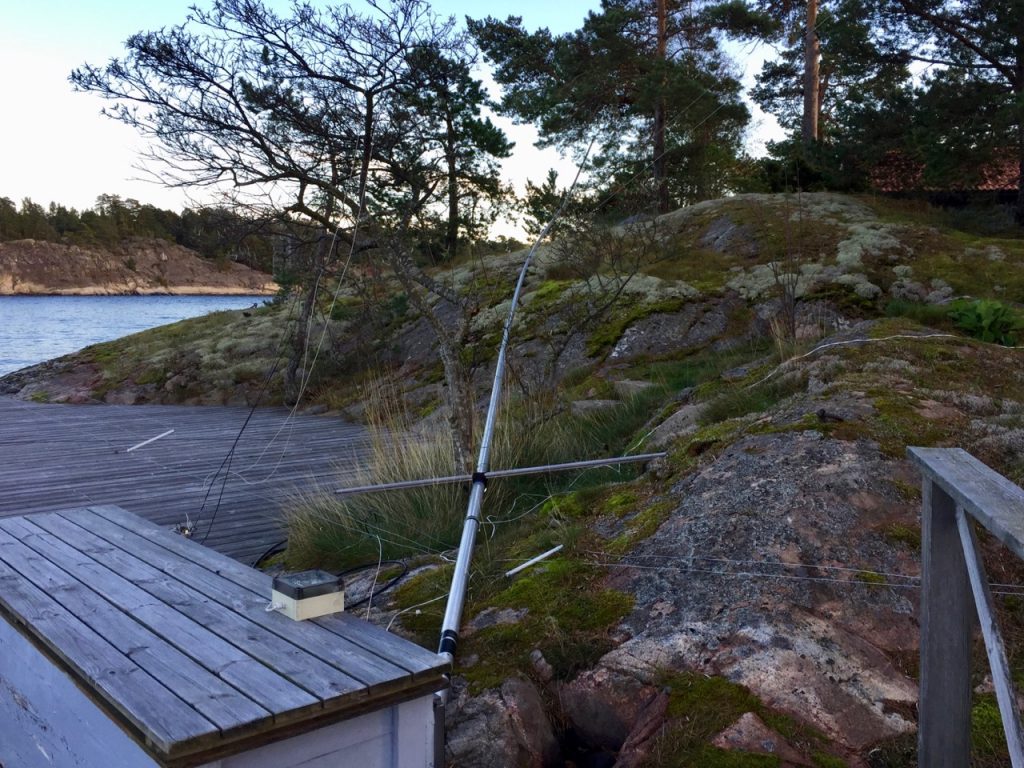 It seems like CQWW CW will be a single band effort! The Topband Vertical a SE0X didn’t even make it through the first storm of the season. This week it was discovered to be resting on the ground after a few days of rough weather with storm. One of the guy line supports didn’t hold up to the forces of nature. After 10 years of loyal service it decided it was time to give up. The antenna itself is in one piece but rather deformed. The FCP and loading coil is a mess. It will be a challenge to get it back up and into service before the CQ160 contest.

The skimmer receiver at SE0X has been offline a few weeks. Some of the local species find RG6 coaxial cable delicious. Our 100 meter coax was temporarily repaired this past winter after being chewed off. This summer when replacing the coax, I found deep cuts caused by animals in several places were the coax crosses trails.

The new coax now cross these trails inside a rubber hose which hopefully will protect the coax a little better. Protecting your expensive coax against the wild life is definitely something to if your station is in the woods. Luckily the SE0X skimmer is located away from the main station. At SE0X wild life is limited to birds, fish and the occasional fox who doesn’t mind a swim.

Skimmer spots are being reported to the Reverse Beacon Network by SE0X and can been seen here.

Challenged by the QRM picked up by my omni directional active RX vertical when trying to work TL8TT on Topband, I decided it was time for a directional RX antenna pointing south in addition to my N/W and N/E Pennants. I had a transformer and termination resistors collecting dust so I decided to throw out some wire to make a short BOG, Beverage On Ground. Since I didn’t have any proper common mode chokes at hand I just wound about 10-12 turns of the coax around a FT-240-31 core. How does this quick fix compare with a proper RF choke? END_OF_DOCUMENT_TOKEN_TO_BE_REPLACED

CQ 160 is one of my favourite contests. The goal this year was set to break the SM record in SO-HP Assisted. In addition I also wanted to beat my own score from 2010 in SO-HP (unassisted). Reasonably well prepared, somewhat rested and with the gear in shape I was ready to take on the challenge. This is the story of SE0X in CQ 160 CW 2017, keep on reading to see if I succeeded in hitting my goals. END_OF_DOCUMENT_TOKEN_TO_BE_REPLACED 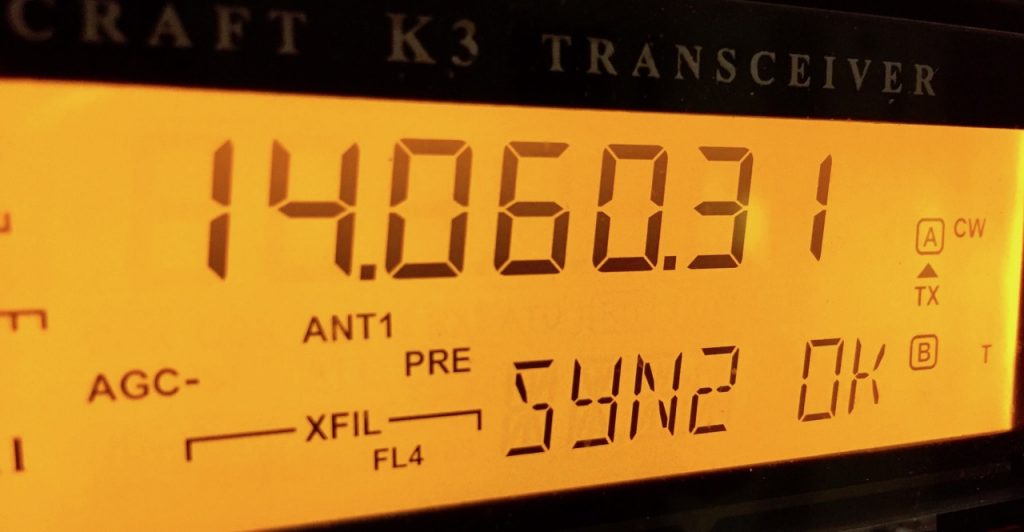 The Elecraft K3 transceiver at SE0X is an early first batch model. It was ordered within days from the K3 announcement at the Visalia DX convention 10 years ago. Many improvements has been introduced over the years and most of them have been implemented in our K3. END_OF_DOCUMENT_TOKEN_TO_BE_REPLACED

Our CW skimmer is finally online again after a series of both software and hardware problems. It all started with with Windows automatically upgrading to Win 10 which lead to network problems. The WiFi link was replaced with Ubiquity equipment which seemed to cure the problem. END_OF_DOCUMENT_TOKEN_TO_BE_REPLACED