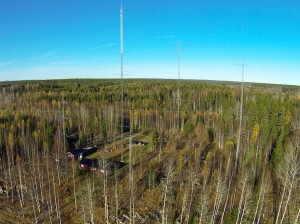 Last weekend a small team came together at SK3W to take shot at the Multi-One SM record in ARRL DX SSB. SM0MLZ, SM0MDG and SM5PU teamed up with SM3SGP for the contest. The weekend started with a very nice team dinner on Friday evening, SM0PHU had prepared a very delicious “Beef Rydberg”.

The first two hours of the contest was a disaster with too little propagation to get a run going. At around 0200z Twenty meter opened and the rest of the night we had a decent rate. But as the morning came we believed that we lost too much in the beginning to have a real chance on breaking the record. We felt that we were too far behind target.

Saturday afternoon we got very busy on high bands. Ten meter was fantastic with strong signal and Fifteen meter also provided well. On Sunday we were really picking up speed, ten and fifteen rocked.  During Sunday afternoon we realized that we might still have a chance to break the record. With three hours to go we just needed to keep the rate above 115 contacts per hour and scope in the last renaming multipliers on 15 meters. Ten and Fifteen meter closed a little too early on Sunday for us to reach the goal. We moved to Twenty meter and continued to log mainly low power stations resulting in a lower rate.

Low bands where generally weak during the ARRL SSB weekend, but we snatched the multipliers that became available on Forty and Eighty. Topband only provided two contacts, one to VY2ZN and the other to K2XX in NY. We where a little surprised that W3LPL and WE3C didn’t hear us despite their stable 57-59 signals.

We crossed the finish line with 2,578,644 points only 1,4% above the current record. After score reduction this will most likely not be enough to reach the record. In any case it was a fun contest with lots of actions on higher bands.