The IARU HF Contest this past year was a lot of fun despite the bad band conditions. More than 1000 QSOs where logged in 22 hours of operating time. Here is a short summary with results.

In an effort to break my own SOHP SSB record I made several preparations including a quick and dirty “bucket coil” to be able to load up the 80 meter vertical on 160 (see photo above). Another change to the setup of SEØX was to install a SunSDR2 PRO transceiver instead of the K3. The experience with software defined radio (SDR) from CQ-160 SSB left me with a taste for more. You can read more about my contesting experience with the SunSDR2 PRO here.

Unfortunately the K-index was high and propagation was week already from the start. The rates where below my planned hourly rates and it was hard to get good runs going. At midnigt I was already 300 contacts behind my hourly goals.

20 meter was the goto band with 46% of all contacts in the log. Smaller runs where done on 15, 40 and 80 meter but on those bands most time where spent hunting for multipliers. 10 and 160 meter where visited only occasionally exclusivly for multipliers.

There was very little K/VE in general, and not even in decent numbers on 15 meter. The lack of five points DX contacts really impacted the final score. The good news is that I made improvement in the number of multipliers compared to earlier efforts.

The band scope of the SunSDR2 PRO helped speed up my sweeps for mults by adding the visual band overview. And the “bucket coil” mentioned above helped adding 18 multipliers to the total stack of 265.

The claimed score is 787315 points, not bad considering the weak band conditions but it won’t beat my current SM record at 826140 points. 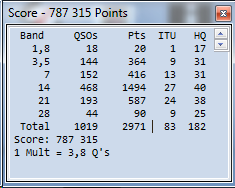 Thanks to everyone in the log, CU in the next contest!